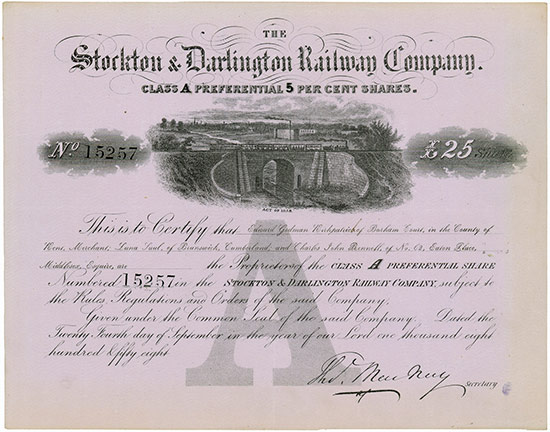 A share of the world's first steam locomotive railway! On his travels buying and selling wool, Edward Pease, a rich wool merchant, came to the conclusion that there was a great need for a railroad with waggons drawn by horses to carry coal from the collieries of West Durham to the port of Stockton. In 1821 Pease and a group of businessmen formed the Stockton & Darlington Railway Company with a capital of £120,000, most of this financing came from the Darlington area. On 19th April, the company was authorized to build a horse railway, but Pease was soon convinced by George Stephenson of the superiority of locomotives to horses. Pease asked and received permission from Parliament to make and erect locomotive or moveable engines. In 1823 Edward Pease joined the Robert Stephenson & Co. company which was solely aimed at the production of locomotives. The first railway locomotive, Locomotion, was finished September 1825 and on 27th September it pulled 36 waggons filled with coal and flour, guests and workmen. The initial journey of just under 9 miles took 2 hours, with a maximum speed of 15 mph (24 kph). At first only freight waggons were pulled by locomotives, passenger coaches were still horsedrawn. By 1833, the Stockton and Darlington had become entirely steam-operated, and proved a huge financial success. Meanwhile, it was an example for many other railways, such as the Liverpool and Manchester Railway. The Stockton & Darlington Railway was absorbed into the North Eastern Railway in 1863, which merged into the London and North Eastern Railway in 1922. Much of the original railway is still operating today.