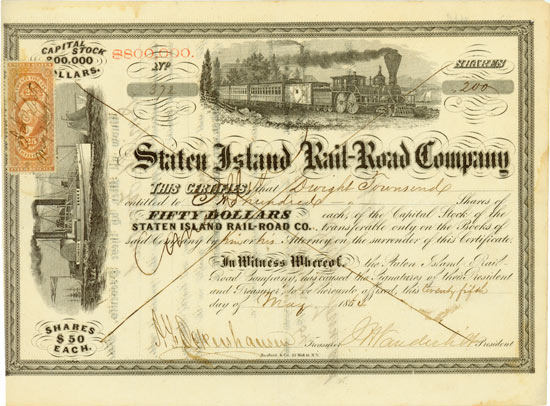 William Henry Vanderbilt (1821-1885) was the son of the legendary Commodore Cornelius Vanderbilt. William commenced his career in a bank company in Wall Street. Health reasons, however, took him away back to Staten Island. Afterwards, he was working as farmer. These entrepreneurial skills convinced his father. That is why he handed over the management of the Staten Island Rail-Road Company to him. Later on, his father appointed him vice-president in the Harlem-Line. Soon enough, William was head of the most important Hudson-Line. After the death of the Commodore, William H. Vanderbilt took over the power of the family empire. The significance of Jacob H. Vanderbilt, the brother of the legendary Commodore Vanderbilt, is often underestimated. Contrary to the Commodore, who was a genius, Jacob was an excellent practical person. He worked himself up from his first job as ship pilot until president of the Staten Island Rail-Road. There is something special about the Staten Island Rail-Road: it had been the first railroad investment of the Vanderbilts. The line started at ship pier of the Vanderbilt-line and transported passengers on the peninsula of Staten Island located in front of New York. The Commodore had created the first large integrated transportation system in New York with this combination.