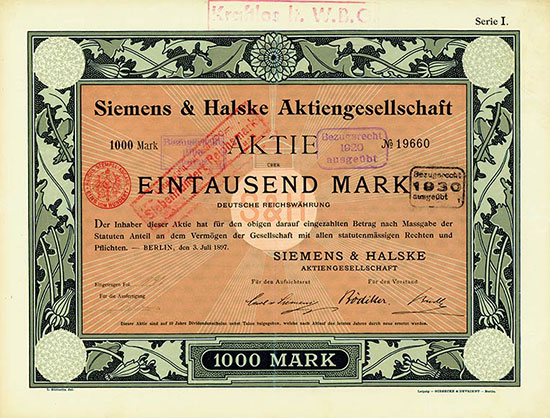 Werner von Siemens improved the telegraphs, invented by Morse and Wheatstone and founded a offene Handelsgesellschaft (limited partnership) together with the watch maker and mechanical engineer Johann Georg Halske. The capital of the first company for electrical equipment consisted of 6,843 thaler which were all borrowed from Siemens` uncle Georg. Thus he became a silent partner. In the following years the company really flourished. Siemens limited the field of his activity largely to communications technology and neglected the power engineering. His brother Karl led the company already before Werner Siemens` death in 1892. In 1897 his cousin Georg urged Karl to finally transform the company in a joint stock company. Today the company is one of the biggest companies for electrical equipment in the world.