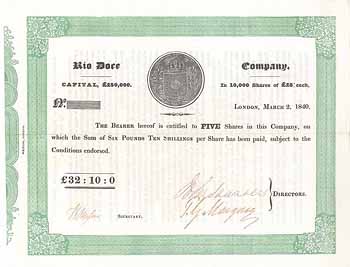 The Rio Doce iron-ore deposits, in the State of Minas Geraes, were well-known to the Portuguese colonial government, but there was much more interest in the widespread gold deposits. It was only after the independence of Brazil, and the arrival of foreign mining entrepreneurs, that the iron-ore began to be exploited seriously. This company was formed by a British group in 1840. The concessions were taken over by the Brazilian government, and Rio Doce has remained state-owned to this day. These days CVRD (Companhia Vale do Rio Doce) produces tens of millions of tonnes of ore yearly, giving millions of tonnes of iron in pellets.