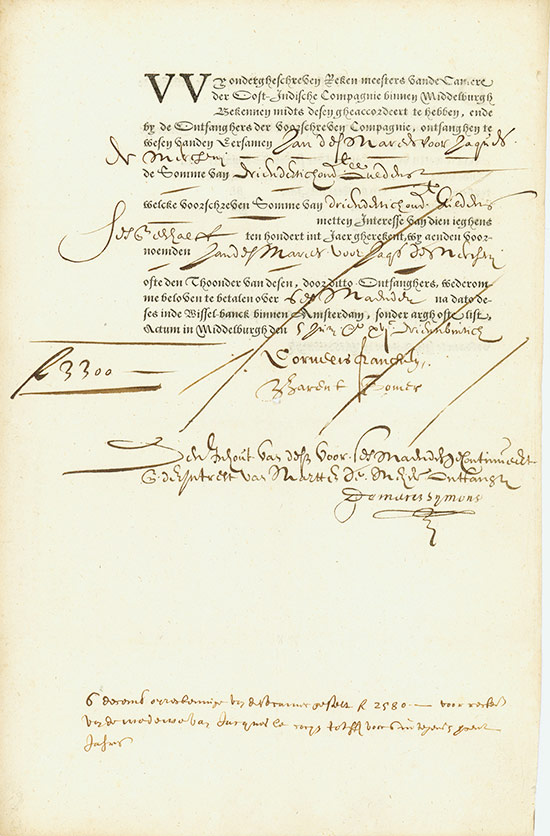 Vasco da Gama arrived at the Malabar Coast on 20 May 1498. He was commander of the first ships, which sailed around Africa directly from Europe to India. This achievement was the reason why Portugal was dominant in the Indian Ocean. The Dutch cartography developed to the leading in Europe at the end of the 16ht century. In 1595 the first Dutch fleet started to Asia. It was led by Cornelis de Houtman. For this reason the Compagnie van Verre was founded. The expedition was very successful. This was the reason, why five more expeditions – organized by other East-Indian-Compagnies – started from different Dutch cities in 1598. Nine more expeditions started in the following three years. At the time, it was customary for a company to be set up only for the duration of a single voyage, and to be liquidated on the return of the fleet. Because of this structure, no trade stations and no long-term trade relations were built. Shortly after the success of the first expeditions there was the idea of a merger of the competing companies. There were first joint-ventures already in 1598. In Amsterdam was the Eerste Vereinigde Compagnie op Oost-Indie founded in 1600. This company already got a monopoly for the trade with East-India, but the monopoly was only valid for the city of Amsterdam. The monopoly was similar to the monopoly which was later given to the V.O.C. Other companies joint the company, and the Vereenigde Oostindische Compagnie (V.O.C.) was founded on 20 March 1602. It got a trading monopoly which was valid for 21 years. The V.O.C. was the only person or company of the Netherlands who was allowed to trade with East India. The V.O.C. paid only 25,000 Gulden for this right in 1602. The V.O.C. also had sovereignty rights. The company was allowed to appoint Governors and to establish armies and fleets. The V.O.C. was able to act in Asia as a sovereign state. Each of the originally six companies, which merged in the V.O.C., got a regional office, which was called “Kammer”. The directors of the six companies built the executive committee of the V.O.C. For the first time in history the executive committee decided to finance the company by issuing shares. The shareholders were bound to their shares for ten years. In 1612 the invested money and interest was paid to the shareholders. It was possible to subscribe the shares for another ten years. In the following years the company paid also dividends. But the shareholders had nothing to say in the company. The V.O.C. saw a great boom during the 17th century. It conquered Malacca (today Malaysia) in 1641. This region was in Portuguese control before. The V.O.C. built an own trade station at the Cap of Good hope in 1652. Palembang in South Sumatra was conquered in 1659. Makassar was conquered in 1667. At this point the V.O.C. controlled all harbors in Asia. The V.O.C. was the only trading company which made profits during a period from 1635 to 1690. The company gained large parts of their profits with the Inner-Asian-Trade in the following years. The V.O.C. survived the first three wars between England and The Netherlands. The fourth war (1780-1784) caused problems. It was impossible for the returning ships to arrive at the European harbors of the V.O.C. The company lost money and their credibility. The final end of the V.O.C. was the invasion of the French in The Netherlands. The company was liquidated on 17 March 1798, four years before the Bi-Centennial anniversary.