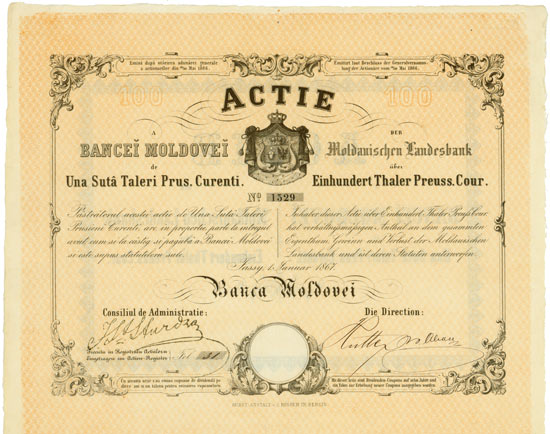 Moldavia united in 1859 with Wallachia as the basis of the modern Romanian state. Until 1878, Romania was formally part of the Ottoman Empire though in practice largely independent. One of only two Romanian shares from the 1860s (the third Romanian share we know of is dated 1872 and issued by the Soc. de la regie du monopole des tabacs de Roumanie from 1872). The Moldauischen Landesbank was founded in May 1866 and its shares were printed in Berlin (at Kunst-Anstalt v C. Ringer). Issued in Prussian Thaler. The bank was founded to increase Germany's influence in the region (against the Ottoman Empire and the Austro-Hungarian Empire). It was formed soon after Carol I of Romania, also known as Prince Karl of Hohenzollern (Germany) was elected Romanian Domnitor (April 1866). The first 9 coupons are cut (thus until 1875), suggesting the bank was rather successful.