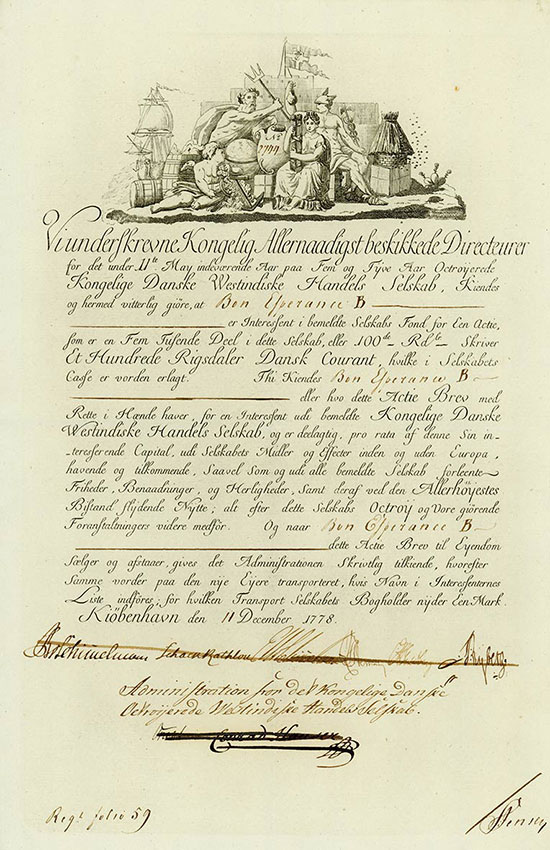 This trading corporation was founded in May 1778 with a capital of half a million Reichstaler. The goal was to profit fully from the economic upsurge that the American War of Independence had created for neutral Denmark. In exchange for a payment of 16,000 Reichstaler per year, the company was exempted from all duties and port fees and even provided with a warehouse. In exchange for 20,000 Reichstaler annually the Danish coffee tolls were signed over to the company. Business flourished. At first, dividends of 4 per cent were distributed, then 10, 50, and 40 per cent, and twice subsequently 20 per cent. During this boom the company increased its capital by augmenting the denomination from 100 to 300 Reichstaler. However, the war boom subsided and competition grew stronger. When the accounts were checked in 1785, disillusion hit hard: 308,360 Reichstaler were all that remained of the 1.5 million starting capital. That was the end. The state supported the company because in a liquidation only 60 Reichstaler per share would have been left. The state proved to be generous and paid 200 Reichstaler on top of the 60 to the shareholders. However, these funds were not distributed in cash, but in bonds at 4%. Carl Heinrich Schimmelmann was born in Pomerania in 1724. He started his business by trading colonial goods such as sugar, coffee, and tobacco in Dresden. His financial transactions became more important. Later on, he moved to Hamburg and supplied the Prussian army with precious metals. In 1761, the Danish state asked for his advice on economic affairs. The king appointed him superintendent of commerce and, in 1762, a Danish baron. Soon Schimmelmann realised that money could be made especially in the overseas trade. He purchased four plantations in the Danish West Indies from the king as well as a sugar refinery in Copenhagen. After his death in 1782, his son Ernst Schimmelmann was his heir. He, however, dedicated himself more to poetry and philosophy.