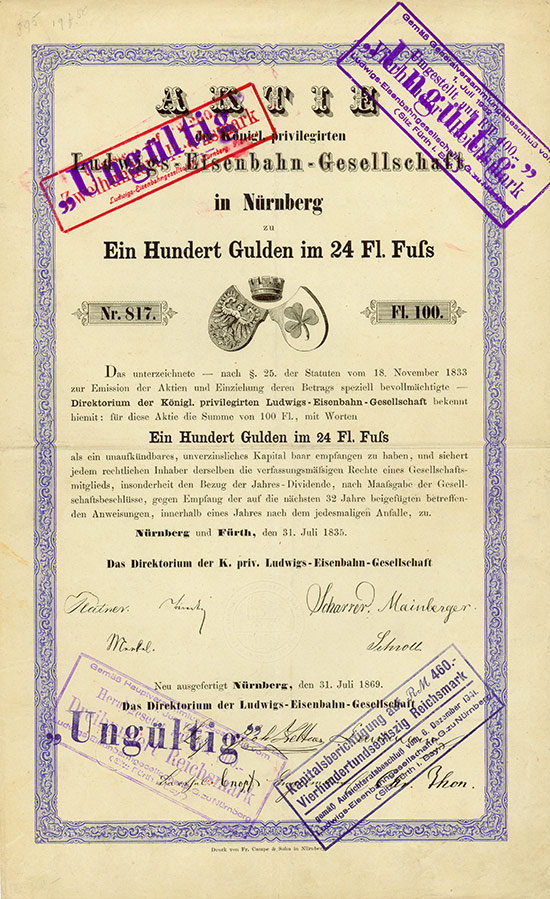 This is the first steam railway in Germany. The company received a concession to build a railway from Nuremberg to Fürth (both in Bavaria) on 19 February 1934. While the line was only 6 km long, it was the busiest commercial road of Bavaria. The two key initiaters were the Nuremberg merchant and market chief, George Z. Platner and the head of the city's polytechnical school, Johannes Scharrer. They raised 132.000 guilders in 1935 and the same year the railway was built. It opened on 7 December 1835 as second steam railway in Continental Europe (the Brussels - Malines railway in Belgium opened a few months earlier). The locomotive, the Adler (Eagle) had been built by George Stephenson but the carriages were supplied by local wagon-builders. At the beginning, and because of the high cots involved, only the early afternoon train was pulled by the locomotive. The rest of the day, horsepower was used, that stopped in 1863. The Bavarian King Ludwig was a strong promotor of the railway and its success was iminent: in 1836 a 20% dividend was distributed and until 1855 the annual dividend was never below 12%. In later years, competition came from horse trams and, from 1898 onwards, electrified trams. Profits fell and the the Ludwigsbahn closed in 1922 though the line was leased to the Nuremberg tramways.