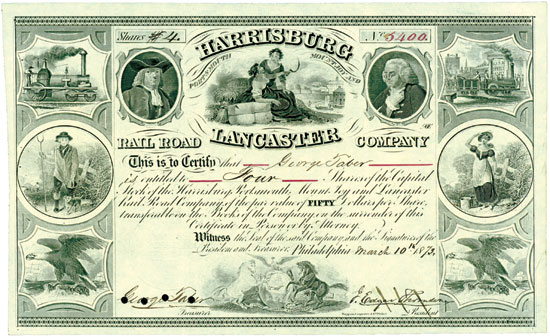 The company operated a line of 36 miles from Harrisburg to Dillerville, with a station in Columbia. In 1860 the railway was leased to the Pennsylvania Railroad for 999 years. John Edgar Thomson was the railroads executive director and financier. He was the third president of the Pennsylvania Railroad. Thomas Scott was one of the big personalities of his time in the railroad industry. After his attempt to build a railway line all the way through the South of the USA failed because of Collis P. Huntington and his Southern Pacific, Scott assumed the management of the Pennsylvania Railroad in 1874. During the 70ies he expanded it into the largest railway system next to that of the Vanderbilts (Penn-Central System). Two years earlier he had already become president of the big Pennsylvania Company, the Holding of the Penn-Central System.