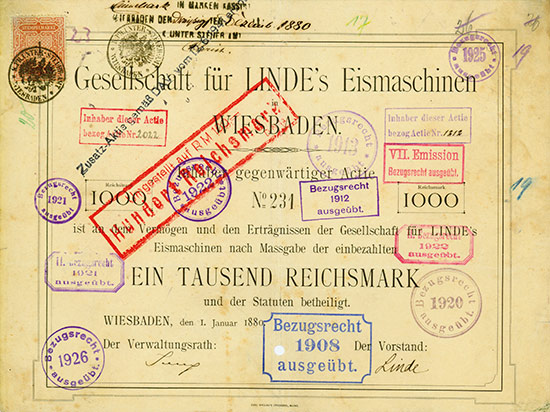 Carl von Linde (1842-1934) was trained in the machine and locomotive works Borsig in Berlin. He moved to the Bavarian capital Munich in 1866 to take a leading position in the newly founded locomotive company Krauss & Co. (Krauss Maffei). At the age of 26, Carl von Linde presented his locomotive at the Paris World Trade Fair and won a gold medal. A group of brewery owners and his boss Georg Krauss convinced Carl von Linde to found his own company (Gesellschaft für Linde's Eismaschinen AG) in 1879. Linde developed cooling machines, which were used mainly in breweries, slaughterhouses and ice production companies. The Linde AG is nowadays one of the leading companies in the field of cooling technologies.