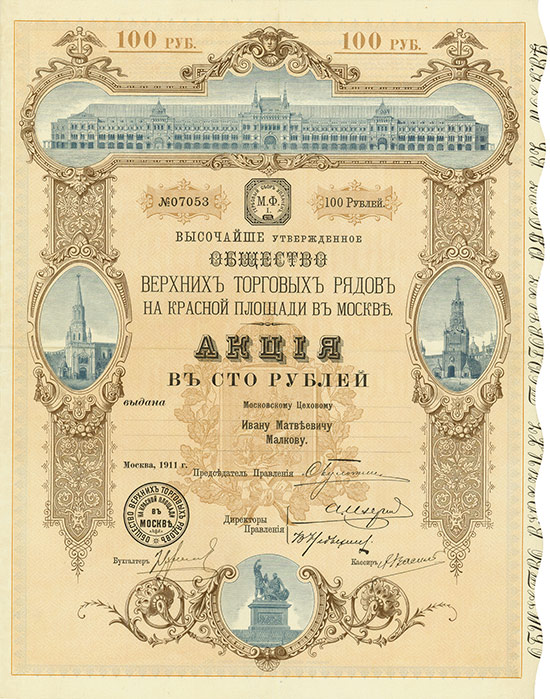 Red Square has been a centre for trade in Russia since the 15th century. Until the early 19th century it was a very informal market area, based on a labyrinth of narrow passages. Tsar Alexander I decided that it must be rebuilt as a formal organised market, and a building, similar to Roman markets, was built; it had upper trading levels, separate from the market at street level. In 1890 it was decided to enlarge and rebuild the market, and the enormous construction works were completed in 1893. Thebuilding was taken over after the Revolution, the traders expelled, and reopened in 1921 as a government building. Only in 1953 did the building return to its original purpose. The Soviet Government decided to rebuild the lower levels, which, together with the upper levels, became the famous department store GUM. A company was formed in the 1890s to manage the department store, and this is one of its shares. The piece is in perfect condition, and is extremely decorative. It shows the magnificent 1893 facade of the building, right across the share, and also two of the Kremlin towers. At he bottom is the memorial to the heroes Minin and Posharski, in Red Square.