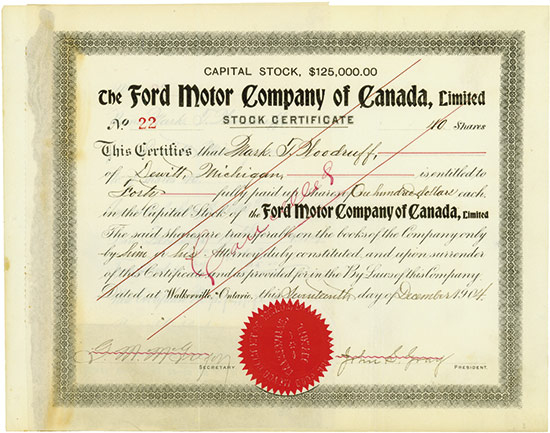 In 1904, Henry Ford incorporated his Canadian company, only one year after he started production in his first plant in the United States. His goal was to save customs this way and to participate in the lower Canadian wages. The Canadian company supplied the United Kingdom and the Commonwealth with cars. Ford was always one of the largest Canadian companies. It was even the largest Canadian company in the 1970th. John Simpson Gray was born in Edinburg, Scotland in 1841. He emigrated with his family to the USA and started a farm in Wisconsin in 1849. Together with partners Gray incorporated a candy company. This company was sold to the National Candy Company in 1903 and bought 10.5 per cent of the newly incorporated Ford Motor Company. Gray became the first president of the company, Henry Ford was Vice-President. Gray died in 1906.