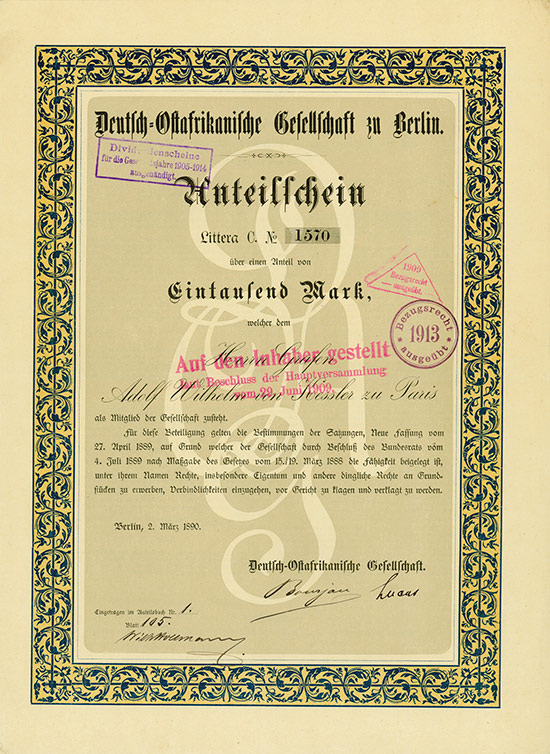 In 1887, the German colonial company in East Africa was founded as the Deutsch-Ostafrikanische Gesellschaft Karl Peters & Gen. The Sultan of Zanzibar granted the new company his sovereign rights, so the company (soon known as DOAG) was in effect an independent state. A rebellion which broke out in 1890 was put down only with help from the German government, and thereafter, in the years to 1902, sovereign rights were gradually transferred to the German Empire. The economic foundation of the DOAG was 14 trading-posts and 9 plantations. The firm exported sisal, coffee, rubber and coconuts. The company had interests in 24 other colonial companies. The DOAG was certainly the most important of German colonial companies, until it lost its properties as a result of World War I. The company continued to exist as DOAG Holding AG until it merged in 2002 with the Vereinigte Deutschen Nickel-Werke AG and the Langbein Pfanhauser Werke AG. Interestingly, all shares known to have survived were once owned by Count Kessler. He lived in a castle near Paris. At the outbreak of WWI however, he had to flee. The shares remained hidden in the castle for over 75 years until they were discovered in 1991. Presumably, all other shareholders had exchanged their old shares for a new issue in 1925.