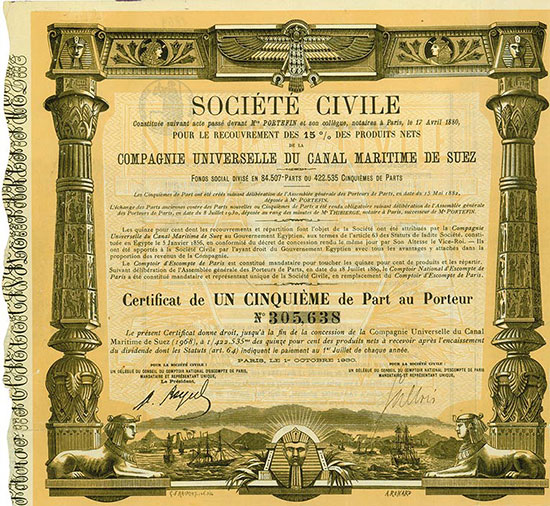 The 163 meter long canal was built under the direction of Ferdinand de Lesseps in the years 1859 until 1869. Thereby, a connection from the Mediterranean to the Red Sea was established. The canal was built on the only 113 kilometre wide isthmus of Suez. Since its erection it is no longer necessary for ships to sail around the cape of good Hope to reach the waterway from Europe to Asia. The Suez canal corporation founded by Lesseps in 1858 became its owner. The British government was a large shareholder. Since the Anglo? Egyptian treaty, the Suez canal was controlled and protected by Great Britain's military. After the British troops pull out in 1954 and 1955, the Egyptian president Nasser initiated the Suez crisis and as a result nationalized the Canal. The share holders received a compensation of 23 Million Egyptian pounds. In contrast to the Panama company, the Suez Canal was a great success for the shareholders. In contrast to the Panama company, the Suez Canal was a great success. By historical securities there are also variants: There are considerably less variants known from the Suez Canal. In addition, these are much rarer then those of the Panama company.