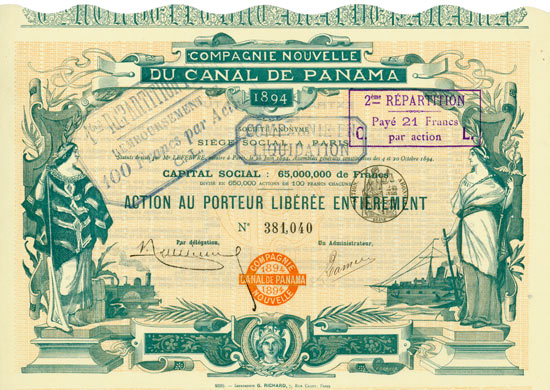 In 1858 Count Ferdinand de Lesseps founded the Suez Canal Company. Eleven years later the canal with a length of 168 kilometres (104.39 miles) was opened. After the company was already in the black in 1874, its market price continued to increase over the following years. However, de Lesseps was already thinking about the next coup: he began to develop plans for a Central American canal. Therefore, in 1880, he founded the Compagnie Universelle du Canal Interoceanique de Panama. Due to the Suez boom, the issue which had been established at 600,000 shares was soon oversubscribed. The 73 kilometres [45.36 miles] long canal was to be completed within six years. At first everything went well and the further financing was secured by issuing several loans. However, in 1886 the truth came out: only a sixth of the soil had been drawn out so far. The shares declined and the loan emissions could no longer be sold in full. On February 4, 1889, the liquidation of the company was decreed. With shares, bonds, and profit certificates more than 800,000 Frenchmen had lost money in the total amount of 1.8 billion gold francs. In 1894 this company tried to built the canal, but only five years later it was also bankrupt.