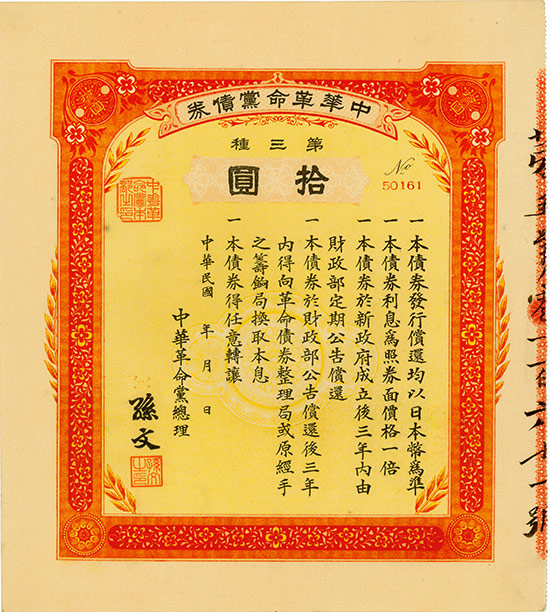 Sun Yat-Sen is the founder of the Republic of China. He was born as Sun Wen. The son of farmers studied medicine at the Hongkong College. He joined secret societies, which had the goal to establish a constitutional monarchy, before he finished his studies in 1892. He practiced as doctor in Macao and worked undiscovered in the underground. He travelled to Honolulu and San Francisco in 1894 to mobilize Chinese people who lived in exile. Sun founded the Xing-Zhong-Hio (Revive China Society). An uprising (First Guangzhou uprising) planned by Sun Yat-Sen failed in 1895. The Quing-Government set a bounty on Sun Yat-Sens head. He stayed 16 years in exile. He formed the unified group Tongmenghui (United League). The Wuchang Uprising started on 10 October 1911. This led to the end of the more than 2,000 years ruling emperor dynasties. Sun Yat-Sen agitated abroad, that the Qing Dynasty won’t get financial support. He was elected as provisional president of the Republic of China on 29 December 1911. Already on 11 February 1912, he resigned and was followed by Yuan Shi-Kai. In 1913, Sun started a revolt, after Yuan Shi-Kai became more and more a dictator. Sun Yat-Sen fled to Japan after the revolt failed. In Japan he founded the Chung Hua Party. He issued bonds to finance the planned revolution. He came back to China after the dead of Yuan Shi-Kai in 1917. He was elected to the president of the National Government in Kanton in 1921. Sun died in Peking on liver cancer on 12 March 1925.