Bank of the United States of America 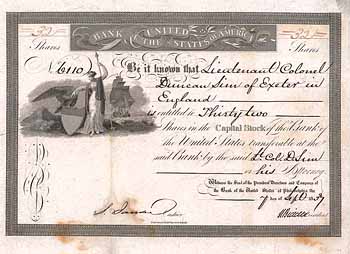 The first Bank of the United States was closed in 1811 with the intention that the states would take over its functions. This did not work well and the second Bank was founded in 1816. The growth of the Bank is largely attributed to Nicholas Biddle. He had already attained insight into international economic problems. At the age of 18 he already belonged to a delegation which in Napoleon’s France negotiated the purchase of French Louisiana by the USA. Around ten years later, Biddle was one of the five government directors of the second Bank of the United States. Later he became its president. Biddle always stood for a healthy central bank policy, whereby the American monetary system was stabilized. His idea of the central bank’s political neutrality lived until a few years ago. The US President Andrew Jackson did not like the influence Biddle had. This was the reason why the Congress in 1836 did not extend the licence of the bank as a national bank.