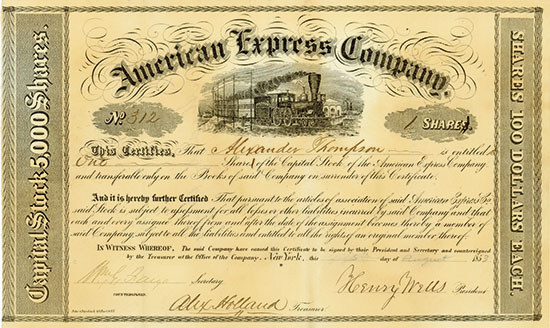 In 1841 Henry Wells undertook his first "express" trip by rail and stagecoach from Albany (New York) to Buffalo. In his luggage he included gold, silver, paper money, and stocks and bonds for merchants in Buffalo. Nine years later, on March 18, 1850, the American Express Company was founded. Henry Wells, William G. Fargo, and others merged their stagecoach businesses into it. According to the company rules, the company lifespan was limited to a period of ten years so that on New Year’s Day 1859 it was totally auctioned off. The purchaser was a new Amexco, whose owners were identical with those of the old company. Thus the certificates distributed starting January 1860 were given a new layout. While the first documents had an image of a train, on the newer documents a dog’s head was sketched. In 1868 the company merged with the Merchant’s Union Express to form the American Merchant’s Union Express. In 1873 the firm was renamed the American Express Company. In its beginning years, American Express offered no financial services, but the company had many large banks and brokers as their customers. American Express realized that transporting share certificates, currencies and other bank products was much more profitable than transporting heavy freight. In 1882, money orders became part of the services American Express offered. This was the first step in the finance business. The first traveler checks were offered in 1891. American Express entered the payment card business not before 1958. The first cards were made of paper. In 1959 the first plastic card was introduced. The first true credit card, called Optima Card, was launched by the American Express Company in 1987. Nowadays roughly one out of four credit card transactions in the United States are done with an Amex card.