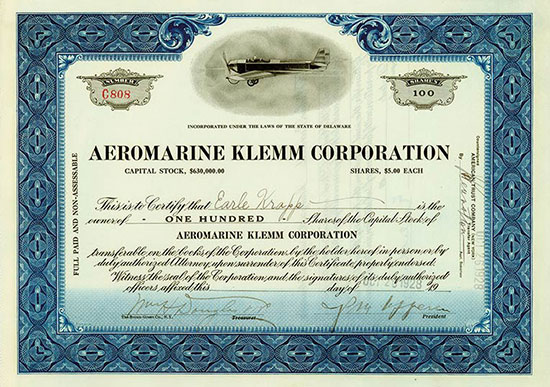 Already in 1908, Inglis M. Upperçu began financing aeronautical experiments by a small company in Keyport, New Jersey. Six years later he founded Aeromarine Plane and Motor Company at the same location. As one of the first American aircraft manufacturers the company built mostly military seaplanes and flying boats. In 1928 the name was changed to Aeromarine Klemm Corporation and the production of Klemm aircrafts (e.g. the Klemm L25) started. Klemm Light Aircraft Company was a German aircraft manufacturer founded 1926 in Böblingen. Dr. Hanns Klemm, previously working for Zeppelin and the Daimler Aircraft Company, was building light sports and touring planes. The company had to stop production due to the post-war ban on aircraft construction. After the ban was lifted in 1952, the Klemm Aircraft Company was reorganized and finally taken over by Bölkow AG in 1959. Aeromarine Klemm Corporation however was closed a lot earlier (1930) due to the Great Depression. Its aero engines production division was taken over by the Uppercu-Burnelli Corporation.