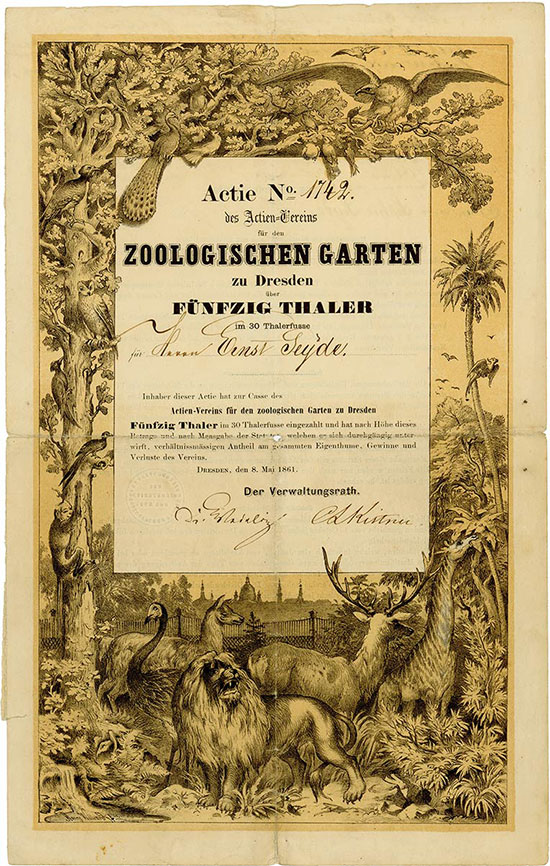 At the end of 1855, an association for poultry farming was founded in Dresden. The citizens of Dresden were fascinated by the poultry exhibitions organized by the association. The association then bought birds and mammals and built a menagerie which attracted many spectators. The foundation of a Zoological Garden in Dresden was the logical next step. A company named Aktienverein für den Zoologischen Garten in Dresden was incorporated in April 1861. An area was located quickly. The Zoological Garden Dresden opened for the first time on 9 May 1861. Director of the zoo was Albin Schöpf. The zoo became well known for the breeding and keeping of predatory cats, and, in the beginning of the 20th century, gained a worldwide reputation for the breeding and researching of anthropoid apes. Between the two World Wars the company suffered reduced earnings as a result of nationwide inflation. In 1934, the city council refused to pay further subsidies. The company became insolvent, and the city council took over the facility. In 1945, the garden was nearly destroyed by the fire bomb attacks and most of the creatures were killed. It was a special triumph when, after intense rebuilding, sections of the zoo could reopen at Pentecost 1946.