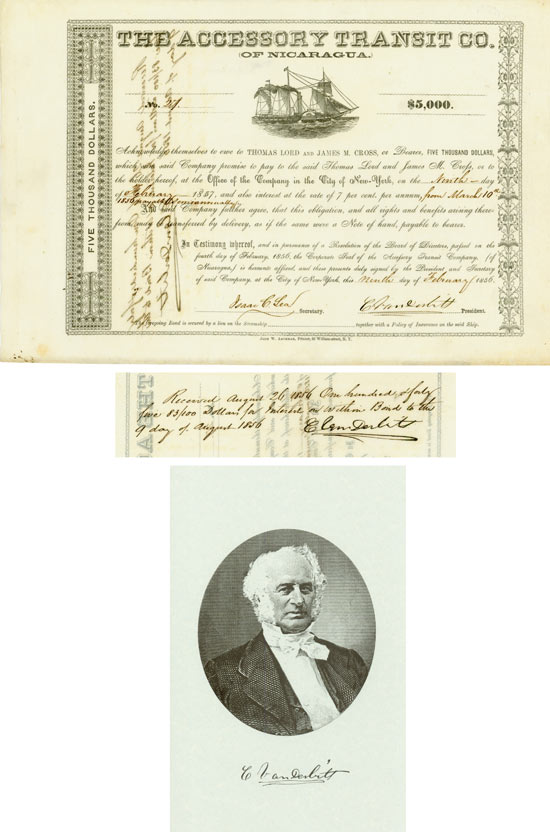 Commodore Cornelius Vanderbilt laid the foundation of his empire with the Accessory Transit Co. of Nicaragua. In spring 1853 the $500,000 North Star was completed. The ship was reputed to be the most luxurious yacht of its time. His affairs were going well; so Vanderbilt prepared for a grand tour of Europe in May 1853 with all his relatives. To protect his interests in Accessory Transit during his trip, he appointed Charles Morgan and Commodore Cornelius Garrison as his authorized representatives. Morgan and Garrison abused their position and deceived Vanderbilt. The Transit War followed. When the Commodore returned from Europe in the fall of 1853, he wrote the two saboteurs a legendary letter, in which he threatened them with ruin. In the period following the Commodore bought up the shares and loans of Accessory Transit. By the end of three years, in 1856, Vanderbilt had regained control. Now he went over to the counterattack: In the next two years he renegotiated transit rights with Nicaragua and assured himself the rights for the next 50 years. Therein he destroyed the basis of the business of Morgan and Garrison (both had opened a competing firm after their dismissal). From then on they had to pay $672,000 annually for transit rights. Vanderbilt on the other hand sold his ships and collected his money; with it he financed the construction of his legendary railroad network.